First and foremost, I’d like to express a huge heartfelt THANK YOU to all the convention goers who spent their hard earned cash on my books. You helped make this convention a success. I will remember this convention for the rest of my life as it kept getting bigger and bigger with every passing day.

The four-day event took place in , a city six hours away from my hometown of . I’d never been to before and I had certain apprehensions; I hate travelling long distance and I was wondering if I’d sell enough books to justify spending a ton of money on a table, hotel, transportation, and all the other related expenses. By the time Sunday afternoon came around, I had sold all my boxes of books, all my e-book CDs and had run out of postcards with my fan page, blog and publisher info. I was a rock star, baby!

The first day started a little slow; CD sales were good but book sales were few and far between as most people said they only looked on the first day and bought during the following days. What brightened my day was that I made a surprise appearance on a panel on indie publishing monitored by Monica Kuebler from Rue Morgue. Apparently, she had put me up for it a while ago but no one from Fan Expo had bothered to let me know about it. It was even listed in the con program that I was doing a panel. I had a great time there and I got to spread the word about my books and what I was doing. A bunch of people came and bought books from me afterwards.

Day two, Friday, is when things really started rolling. I sold lots of books and sold out all the CDs I had brought along containing PDFs of my three books. When chimed, it was time to get my picture taken with my idol John Carpenter. Those who know me understand how much this meant to me; his film Halloween is the reason why I started writing horror books. I inscribed and signed a copy of Fractured Time, my latest novel, to him and gave him the copy as we shook hands for the photo op. “Give it to my agent, she’ll make sure I get it,” he said with a smile. And then the flash of the camera immortalized this moment that I will cherish for the rest of my life. I was in the presence of this legendary director that had inspired me with his tales on film such as Halloween, The Fog, The Thing, Big Trouble of Little China and a dozen other classics, and hoping some of his magic would rub off on me. Apparently it did because from that moment on, I was unstoppable. I look at that picture now and it still feels a little surreal. I’m gonna get it framed in the days to come. After the con, my girlfriend, her daughter and I headed to Luma Restaurant on to celebrate the weekend and my girlfriend’s belated birthday; it was a memorable evening in every respect.

Saturday is when sales went through the roof. I stood all day and pitched high concept one liners about my books and sold to anyone that listened. By the end of the day, Bitternest, my first novel, and The Bitternest Chronicles, my short story collection, were sold out. I was also interviewed by The Avod.com, a cool podcast which should have my interview up by Wednesday.

The fourth and final day, Sunday, arrived with a vengeance. All I had left was lots of copies of my second novel, Fractured Time, and it had been harder to sell this one as a lot of folks were telling me they were a little tired of time travel stories. Nevertheless, I stood and proclaimed that it was a must have book (it really is, I promise you) and that everyone needed to have it in their collection. The first sale came at and I never spent more than fifteen minutes without selling a copy after that, oftentimes selling two to three copies in the span of fifteen minutes. By , my table was all empty and I had accomplished something I had never done before: I was going back home empty handed. Some of the artists in Artist Alley came to shake hands with me and congratulate me on the feat I’d accomplished as they will tell you; it’s not an easy task to sell books when the competition is this fierce, with hundreds of artists and major retailers vying for the con goers’ spending money. To top it all off, a movie producer came to see me and we discussed my next novel, Nocturnal Offerings, and how it might make a cool film.

By 3:40 PM, Alan Draven had left the building. I wound up having to wait two hours for my bus at the terminal but I didn't care. My sweetie came to pick me up at the Montreal bus terminal at 12:45 AM. Fan Expo turned out to be a four-day weekend that went beyond all my highest expectations. I came, I saw, and I conquered. And I will do it again. I’ll go back to Fan Expo in three years but until then, I will be at the Ottawa Comiccon in May 2013 and at the Montreal Comiccon in September 2013. I will see you all really soon. Until then, enjoy my books, and stay safe!!! 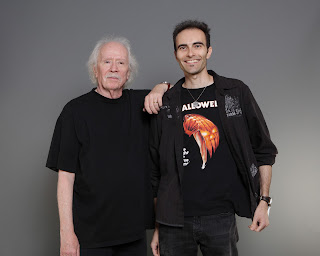